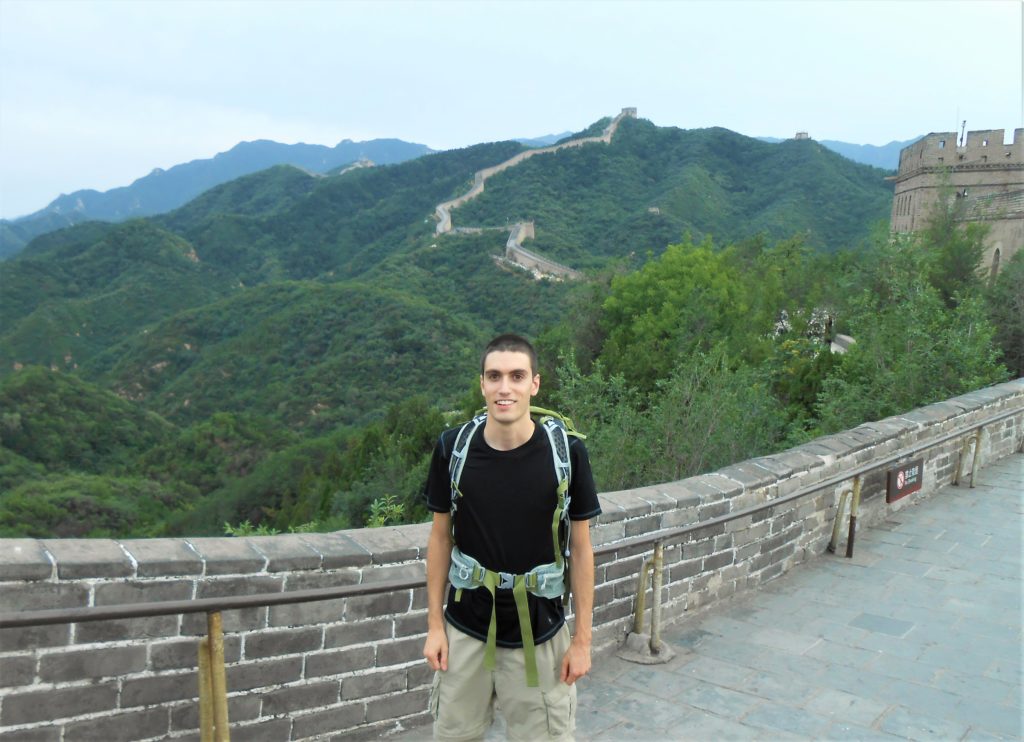 Visiting China to see the Great Wall in 2014.

I was awash in wonder as I climbed close to 1,000 steps to the top of the Great Wall of China. When I reached the top of the wall at Badaling — a tourist hotspot because it is the most magnificent section of the Great Wall of the Ming Dynasty — I realized I was alone. No other tourists were hiking the wall as far as I could see in either direction. It was eerily quiet.

Where was everyone? I figured that, because China is the most populous country in the world with nearly 1.4 billion people, that most if not all Chinese tourist attractions would be extremely crowded — especially the section of the Great Wall that gets up to 70,000 visitors per day.

It was getting late, so I reasoned with myself that most tourists preferred to visit earlier in the day so they could be back in time for dinner.

My mind turned to other thoughts as I made my way along the wall and through the rugged mountains near Beijing. I was experiencing something bigger than myself; an important part of ancient history.

As I approached one of the many towers along the wall, a Chinese family walked out. The children excitedly ran up to me and signaled that they wanted to snap a photo, breaking the silence. I happily obliged, feeling like a celebrity. (It didn’t take long for me to learn that being a foreigner made me the attraction in this area of the world.)

After snapping a few photos myself, I decided to descend the wall. It was getting dark. I walked back to the train station to catch one of the last two trains headed to Beijing for the night.

At least, that’s what I had read in a train schedule.

When I arrived, much to my surprise, the station was closed. I approached an Indian couple and their Chinese friend, who was talking to a station employee. They shared with me that the employee said no more trains were running that day. (No wonder I had the wall to myself that evening – everyone else had left to catch the last train.)

“What about buses?” I asked. No buses, either.

How were we going to get back to Beijing? I had a plane to catch at 8 a.m. the next day. If I missed my flight, it would cause some serious issues: I was in China without a visa under Beijing’s 72-hour visa-free transit rule and my stay was nearing its close.

With no other way back, we decided to try hitchhiking to the capital. I was thankful we had a man with us who knew just enough Mandarin to get by. After a few failed attempts to hitch a ride (several who stopped either didn’t have enough open seats or tried to charge us an astronomical fee), we decided to give up on hitchiking and walk until we found civilization.

After about 15 minutes of walking along the highway, a vehicle slammed on its breaks. The driver stepped out of the car.

All four of us stopped dead in our tracks. Why did the car stop? We didn’t signal for a ride. Why did the driver get out? I was afraid we were about to be robbed.

Whew. We were OK. I don’t know much Mandarin, but I know a friendly greeting when I hear it.

The man who stopped owned a restaurant at the Great Wall. He and our Chinese companion had chatted for a long while that day because there hadn’t been much of a lunch crowd. The restaurantuer offered to give us a ride to a bus station outside of Beijing.

As the four of us returned to Beijing, we bonded over nearly becoming stranded at one of the greatest wonders of the world.

I was a poor recent college graduate when I visited seven countries in an around-the-world-in-three-weeks trip in 2014. China was my first stop. I also traveled to Taiwan, Japan, Turkey, Egypt, Germany and Canada. The catch? I only paid $98 total for all of my flights, in taxes and fees.

You read that correctly. I flew around the world for less than $100. And you can, too.

After five years of trips to more than 40 countries on every continent except Antarctica, paying for nothing but taxes and fees for most of my flights, last week I launched the website www.WanderSimply.com to teach others to do what I did and see the world on a limited budget. World travel doesn’t have to be expensive. 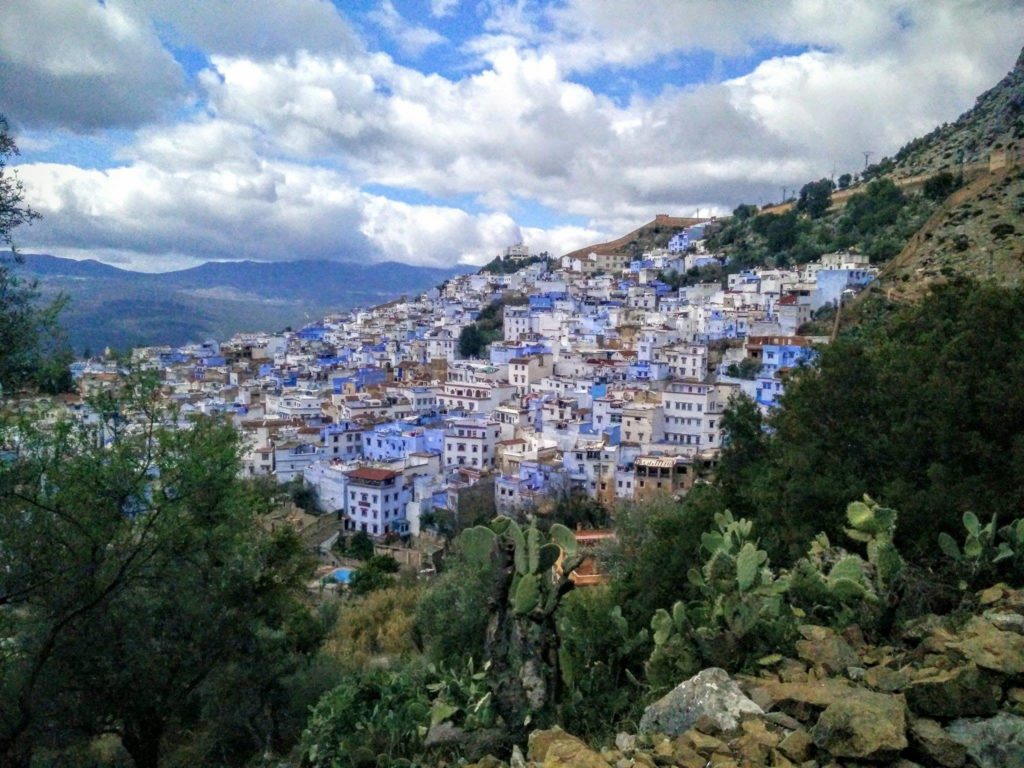 As Americans, we are privileged to live not only in a country where our passports let us travel to much of the world without a visa, but also in a country where anyone can fly for practically free. You don’t have to be a flight attendant, just a savvy think-outside-the-box traveler.

How is this possible? Two words.

In the United States, credit card debt has become culturally acceptable. It’s the norm in our society to finance large purchases with credit cards, and banks and companies know they can make humongous profits off the high interest rates on those purchases if we don’t immediately pay the loan back.

Because the credit card industry is so profitable, companies compete for us. They do so by offering sign-up bonuses ­— usually in the form of airline miles — to anyone who will open an account. Most consumers who open credit card accounts keep the cards for several years. Many only pay the minimum payment each month, so interest accrues over the years.

However, it is also possible (and legal) to sign up for a credit card, claim the bonus airline miles, and then cancel the card without paying any interest, fees or penalties.

The best part is, with the way the FICO scoring model works, your credit score will generally increase over the long term, contrary to what most people would think.

A typical card bonus might give enough miles for a couple of round-trip flights within the United States, or an off-peak trip to Europe or South America.

Be forewarned. This cost-saving method is only for those who are responsible, organized and who won’t be tempted to spend money they don’t have just because they have a bunch of credit cards. If you plan to fly for free with credit cards, you’ll not only need to make your card payments on time and in full, but you’ll also need to keep track of when to cancel the cards to avoid annual fees.

To sign up for a credit card with a large bonus, you’ll also need to have a credit history of more than two years, a FICO score of 730 or higher and a reportable income.

While your credit score will temporarily dip with each card you apply for, and then again each time you open an account, your credit score should increase over the long run, like it has for me, because the majority of your credit score is determined by your credit use, which will decrease as you open more accounts (as long as you reallocate credit before closing them).

Note: Don’t do this if you’re planning on taking out a large loan such as a mortgage within the next few years.

Here’s what I do: I keep track of all my credit cards using a spreadsheet. After eight or nine months with a credit card, I either call up the issuer and attempt to downgrade the card to one with no annual fee, or cancel the card and reallocate the available credit to a different card with the same company/bank that doesn’t have an annual fee.

Reallocating credit just means combining credit limits on different cards; it doesn’t mean transferring a balance. The balance on your card should be zero when you cancel it and reallocate credit. That last step — reallocating credit — is an important one because it will prevent your credit score from going down permanently. 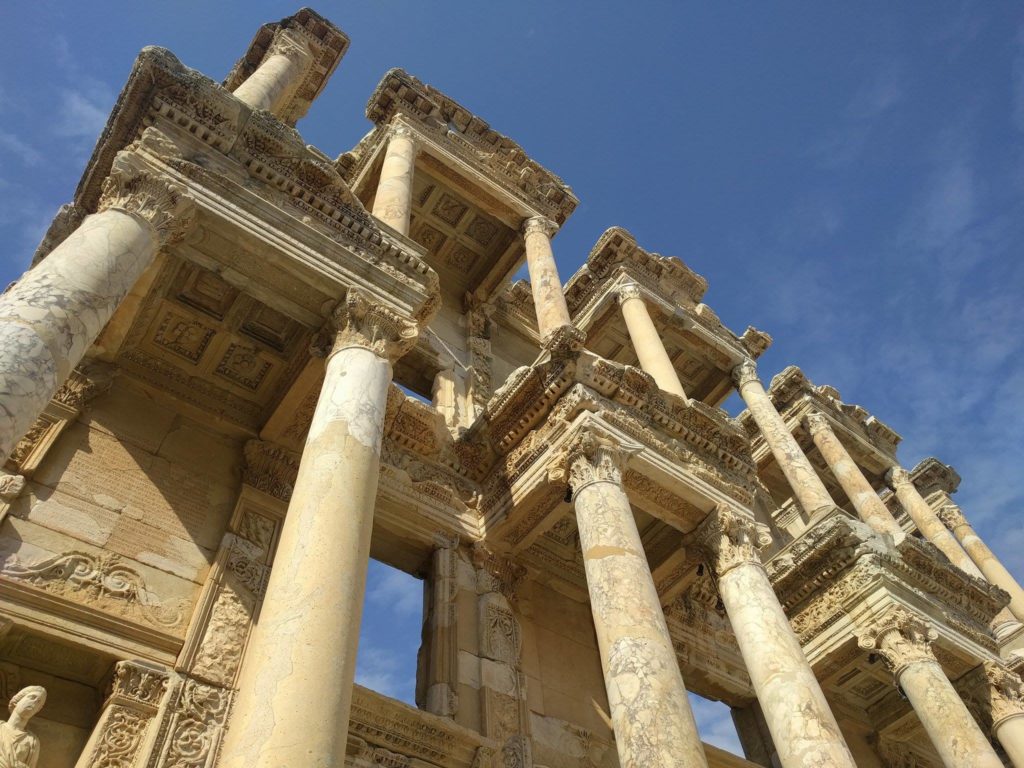 Visiting the Library of Celsus in Ephesus, Turkey, in 2016

So if you are on board, follow these steps to travel affordably and fly for pennies on the dollar:

Figure out where you want to go. Do you want to see the rainforests of Costa Rica? The “Lord of the Rings” filming locations in New Zealand? The Taj Mahal in India? The Eiffel Tower in Paris? The sky’s the limit.

Check how many miles it will take to fly there. Airline award charts will show how many airmiles you’ll need to get from destination to destination. Then apply for a credit card or two with sign-up offers that include bonus miles for your airline of interest. (Read through the terms and conditions for getting the bonus miles. Many credit card offers have spending requirements for the first three months. You’ll need to be able to meet these requirements with your everyday spending.) 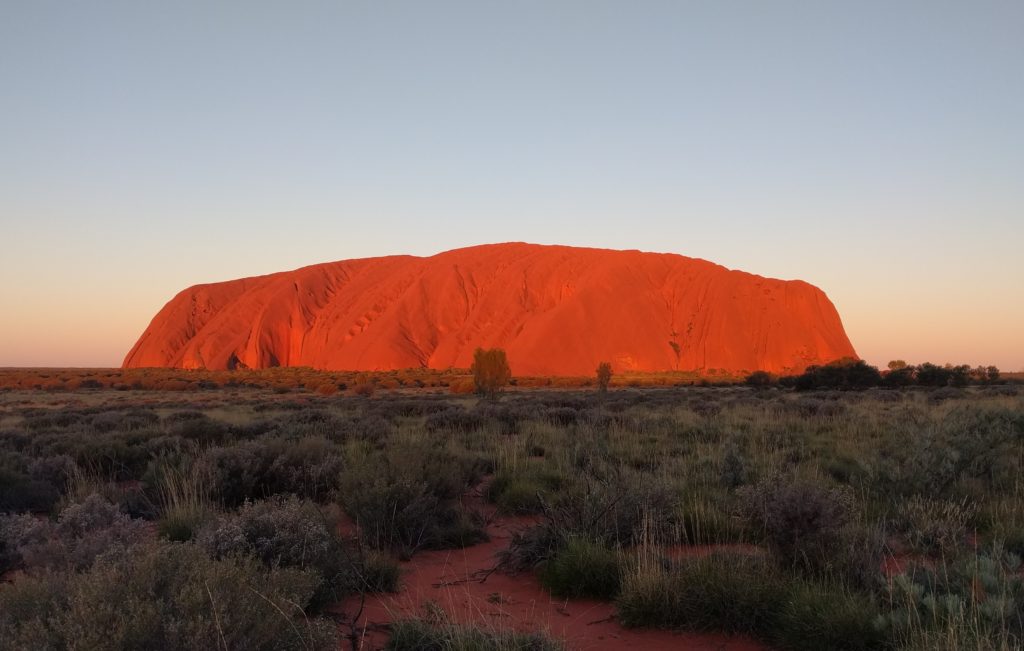 Visiting Uluru/Ayers Rock in Australia in 2016.

In addition to flying for almost nothing, it is also possible to cut other expenses while traveling, to make your trip all-around affordable. Here are some more tricks:

To learn more about the inexpensive travel methods listed here, browse the menu at the top of the page.

Darwin is a small town just outside of Death Valle

An old mining structure in the mountains of Death

We're back! Over the coming months, I'll be postin

El Santuario de Las Lajas is a church near #Ipiale

I decided to try something different today and edi

Aconcagua is the highest mountain outside of the H

Between Valparaiso and Santiago, the capital of Ch

Thankful to have been taking a short break in my t

There has been a problem with your Instagram Feed.